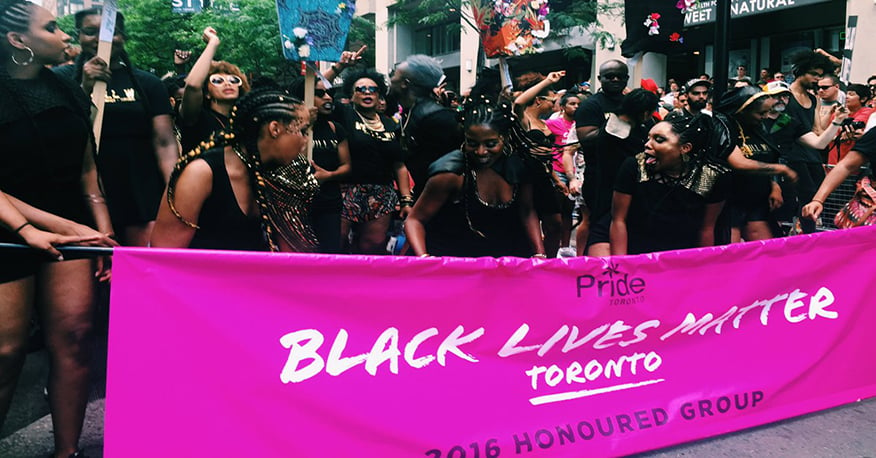 “Pride was born out of the police persecution of Toronto’s gay community,” said Hahn. “We have come a long way since then and if you are a white, gay male, like me, you are much less likely to face police harassment today than you were five or ten years ago. The same can’t be said for all LGBTQ folks and solidarity demands that we all stand together.”

Today, Toronto Pride is famous world-wide as a safe space to be open about one’s sexuality and gender identity. It’s a time to be loved without judgement, but this is sadly not true for everyone.  Toronto’s LGBTQ+ communities are as diverse as the world itself, and people have vastly different lived experiences.

While the parade and festivities continue to grow in mainstream popularity, it is becoming harder for people in parts of LGBTQ+ communities to organize events that reflect themselves and the reality of their lives. Space in the festival is being consumed by corporate donors which decreases our ability to continue to question ourselves about racism, ableism, transphobia, and all the other societal oppression that effect LGBTQ folks.

“Black Lives Matter has successfully shone a much needed spotlight on the institutional racism that exists within the police force toward recialized people in this city,” said Hahn. “The group is led by strong black women who are part of our LGBTQ+ communities. Their actions yesterday helped bring about change that people have been trying to achieve for many years. They gave voice to so many of us who are increasingly marginalized by how Pride is currently being run.”

Among the demands agreed to yesterday, were support and funding for community stages with self-determination for the programing of those events, increased funding for queer and trans black youth during Pride, and a community town hall so that people who make up the diversity within the LGBTQ+ communities can start to have more say over their festival.

“CUPE Ontario is a proud ally of the important work Black Lives Matter is doing,” said Hahn. “In the original tradition of Pride, we salute their use of direct action with clear demands that resulted in positive change for thousands of people in our city. On behalf of our union, we offer not only our thanks, but also our solidarity in our shared fight for justice and equality.”