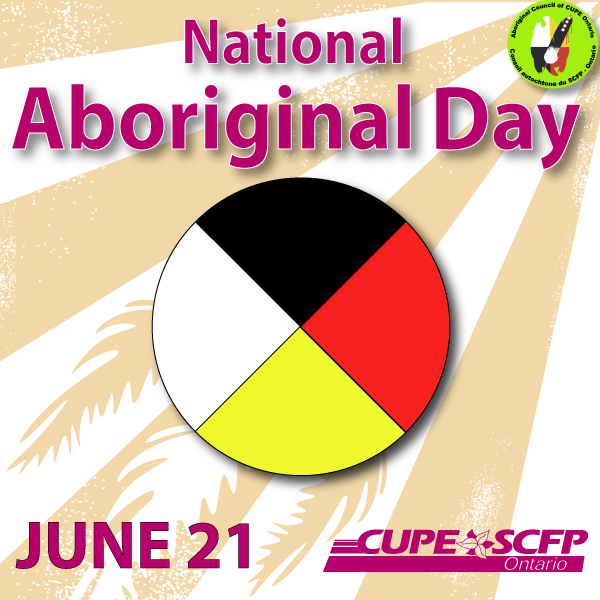 2017 marks the 21st anniversary of National Aboriginal Day, held annually on June 21. This is a day to recognize and celebrate the cultures and contributions of First Nations, Inuit and Métis peoples. It is also an opportunity to reflect on the past and continuing injustices faced by the original inhabitants of Turtle Island (North America) as a result of colonization.

Substandard living conditions and the legacy of colonization have led to a suicide epidemic in Aboriginal communities that is utterly unacceptable.  Indigenous women and girls endure disproportionately high levels of violence, an issue which our justice system and which the National Inquiry into Missing and Murdered Indigenous Women and Girls have so far failed to address.

As a public sector union, CUPE Ontario pledges to fight for justice, inclusion, self-determination, and equal access to quality public services and infrastructure for Aboriginal peoples. These principles underpin our commitment to realizing our role in fulfilling the promise of reconciliation.

We are profoundly concerned by the pace of progress of the National Inquiry into Missing and Murdered Indigenous Women and Girls and call on the Trudeau government to take immediate steps to get the inquiry back on track and fulfill its mandate in a timely manner.

We take this opportunity to reiterate our disavowal of the so-called ‘Doctrine of Discovery’ and call on the Trudeau government to also repudiate it and fully implement the United Nations Declaration on the Rights of Indigenous Peoples (UNDRIP).

We are pleased to note the passage of a resolution at our June, 2017 Convention calling on CUPE National to lobby the Parliament of Canada to recognize National Aboriginal Day as a public holiday. We will continue to work with our members to raise awareness of our common responsibility to work together to achieve truth and reconciliation.