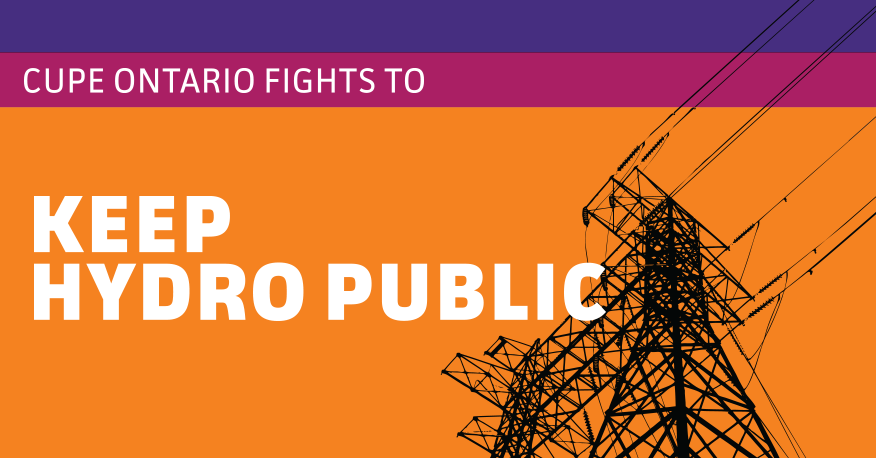 TORONTO, ON – Today’s report by the province’s financial accountability officer should be the final nail in the coffin of the ill-conceived sell-off of Hydro One, said Fred Hahn, president of the Canadian Union of Public Employees (CUPE) Ontario.

“This privatization plan has been a mistake from day one. Now the financial accountability officer has made clear it will not only take away public control over electricity, it will also drive up the province’s debt. Hydro privatization is a lose-lose deal for Ontario,” he said. “It’s time for Kathleen Wynne to pull the plug before Hydro One becomes a scandal to dwarf the gas plants or the 407 deal.”

The report concluded that selling 60 percent of Hydro One would initially drop the debt, but that wouldn’t last. Hydro One currently provides some $750 million in revenue for the province. Once the government begins selling shares, that money would be diverted into shareholder dividends. As a result, Ontario would quickly lose ground and end up with a much higher debt in a few short years.

“Selling any part of Hydro One means public revenue will become private profit. That will drive up debt and mean more school and hospital closures and longer wait lists for the public services we all rely on, every day, in every community,” said Hahn. “There is no public benefit to this privatization whatsoever. If the premier has any interest in public good, she will do the right thing and end this fiasco before it becomes a tragedy of historic proportions for our province.”