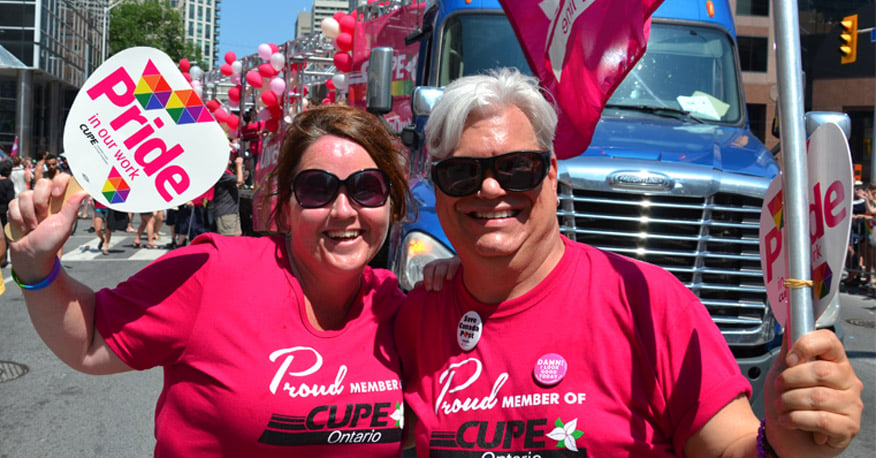 TORONTO, ON – CUPE Ontario president, Fred Hahn, Ontario’s first openly gay head of a major union, is being presented with the Solidarity and Pride Champion Award this evening, for his contributions to improving LGBTQ rights in Ontario.

Honouring his lifetime commitment to building a world where all members of the LGBTQ community have equal rights under the law and within their workplaces, Fred Hahn will be presented with the first of the new annual award, as part of a launch to PRIDE weekend Toronto.

“Fred started out as an openly gay, rank and file member of the labour movement who understood that equality rights are workers’ rights,” says Candace Rennick, his nominator and Secretary-Treasurer of CUPE Ontario. “He is someone who has always understood the diversity within the LGBTQ community and fought for acceptance and understanding of everyone.”

“Fred has never forgotten his small-town roots,” says OFL Secretary-Treasurer Patty Coates, one of the people involved in the selection committee. “He is someone who understands that for some, PRIDE events can literally be lifesavers. His work, supporting the expansion of PRIDE events around the province has made a real difference in people’s lives.”

What: Award for lifetime commitment to LGBTQ rights

Media availability: after the ceremony as well as at the Trans March today at 7:00 p.m. and at Sunday’s PRIDE parade.