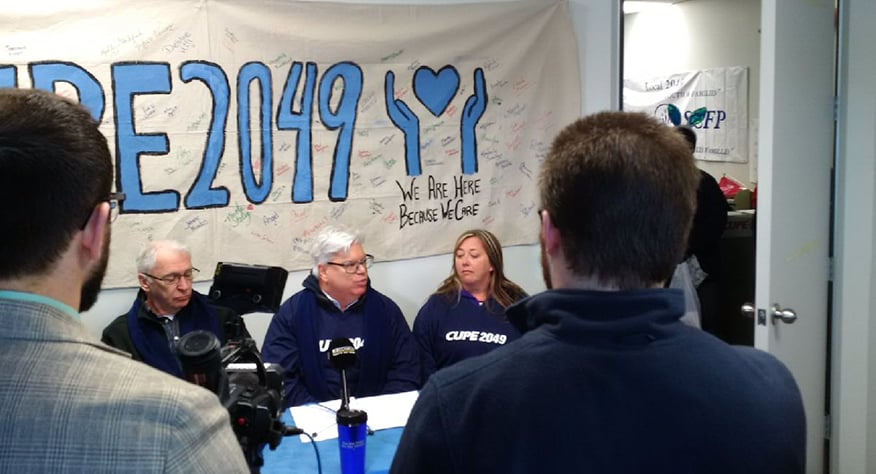 NORTH BAY and PARRY SOUND, ON – A growing concern that the lockout at Nipissing and Parry Sound children’s aid – now at 100 days and counting – is jeopardizing the safety and well-being of the region’s vulnerable children and youth has triggered a demand from the Canadian Union of Public Employees (CUPE) for a ministry takeover of the society.

The call from the union’s leaders comes after negotiations with Nipissing and Parry children’s aid society (CAS) broke down once again yesterday (Thursday, March 30).

“This situation has gone beyond the frustration and dissatisfaction of the workers on the picket line,” said Fred Hahn, president of CUPE Ontario. “The society’s inability or unwillingness to reach a deal with its workers and end the lockout is putting children and young people at risk.”

Hahn described locked-out workers’ daily encounters on the picket line with CAS clients: “We know from first-hand accounts that services are failing; the lockout has robbed families, young mothers-to-be, and foster parents, among others, of the support they need. Children and youth are in danger of falling through the cracks of a system that’s been deprived for over three months of the professionals who make it work.

“For that reason, we are calling on the Minister of Children and Youth Services to dissolve the board of Nipissing and Parry Sound CAS immediately and launch a ministry takeover of the society without delay.”

Hahn went on to stipulate that, once the ministry has taken control of the CAS, its next order of business must be to return locked-out workers to their jobs and conclude bargaining for a new collective agreement.

“Only that way can northern communities once again have the child protection services that they deserve,” concluded Hahn.