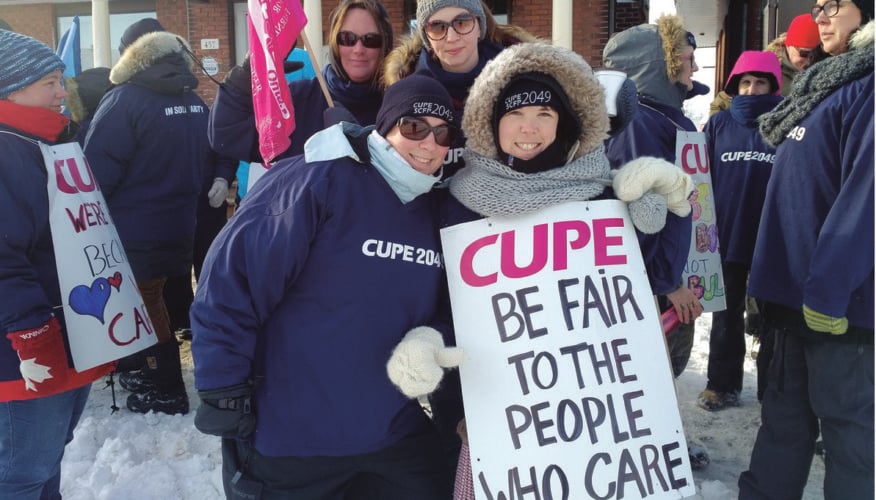 NORTH BAY, ON – Inspired by the remarkable levels of community support they have received since they were locked out by Nipissing and Parry Sound Children’s Aid Society (CAS), workers are finding ways to repay the generosity they’ve been shown through their own “Pay It Forward” campaign.

In recognition of the support and assistance they have received from their community and labour allies, locked-out workers have collected donations of non-perishable food items, which they will deliver tomorrow (Tuesday) in a convoy from their strike headquarters at Foran Street and McIntyre Street West across town to the North Bay Food Bank.

Workers gathered contributions for the food drive at various events, including the “Playing for a Fair Deal” event last Friday in North Bay. The Ontario Secondary School Teachers’ Federation (OSSTF) has also supported the drive and provided a large number of donations from its members.

“We are proud to give back to our community in this way,” said Debbie Hill, president of Local 2049 of the Canadian Union of Public Employees (CUPE). “Since the lockout began on December 23, our members been shown so much generosity by our communities and by labour allies like our brothers and sisters from the OSSTF.

“As people who work in child protection, we believe strongly that it’s important to pay our community back by ‘paying it forward’. And as residents of the region, we just want to show our appreciation.”

Who:    Frontline child protection workers and administrative and support staff of the Children’s Aid Society of the District of Nipissing and Parry Sound

What:    Drop-off of food drive donations to North Bay Food Bank as part of CUPE 2049’s “Pay It Forward” campaign

When:   Tuesday, January 17 at 10:30 a.m.; photo and interview opportunities with locked-out workers of Nipissing and Parry Sound CAS