Full Immigration Status for All 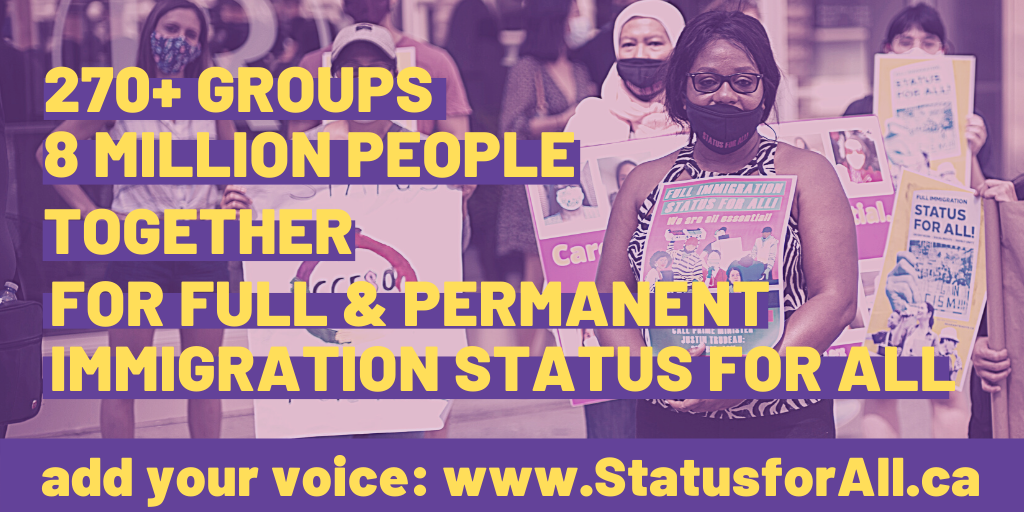 We, CUPE Ontario, join the Migrant Rights Network in calling for full and permanent immigration status for all, without exclusions.

COVID-19 has exposed deep inequalities in our society. The fault lines are gendered and racialized: the worst impacts are being felt by women and in Indigenous, Black and Brown communities. Those most impacted have received the least support. Meanwhile, large corporations that have already accumulated immense profits receive massive bailouts.

Migrants, refugees and undocumented people have lost work and wages during the crisis but many have been shut out of emergency income supports. Those already without wages have been abandoned. They cannot pay rent, have faced starvation, lost life savings and are sacrificing essential health care.

Others have been forced to keep working in dangerous conditions. Migrant workers on farms, in greenhouses and meat and food processing plants have been hit with massive COVID-19 outbreaks. Three migrant farm workers have already died: Juan López Chaparro, Bonifacio Eugenio Romero and Rogelio Muñoz Santos. Migrant domestic workers remain trapped in the homes of their employers, facing greater surveillance, abuse and violence. Migrant students, working in low-wage jobs in warehouses and as delivery drivers, have had their tuition fees hiked to subsidize Canadian universities and colleges.

Now, as businesses reopen, those without work have little choice but to accept unsafe jobs. But conditions are the same as before — low wages and minimal labour protections. Hard-fought gains in access to healthcare remain precarious and limited. Rent hasn’t been paid and evictions are on the horizon. With mounting debt, many are facing greater exploitation but have no way to defend themselves.

An unjust immigration system is responsible. At least one in twenty-three people (over 1.6 million people) are without permanent resident status. Migrants are punished for for leaving bad employers, doing sex work, or getting sick. Access to services varies by immigration permit and is virtually non-existent for those who have been forced out of status.  Lack of permanent resident status makes it difficult, and often impossible, for migrants to speak up for their rights or access services, including those they may be eligible for, because of a well-founded fear of reprisals, termination, eviction and deportation. Migrants, refugees, and undocumented people want to take care of their families and be active members of their communities. But federal immigration rules tip the scales against them.

Full immigration status for all is necessary for global justice. COVID-19 has ravaged communities around the world, deepening economic and political crises that are being exploited by governments. Yet, Canada has closed its borders to refugees and families remain separated. Canada must support migrants and refugees here, reunite families, and ensure that no one is forced to leave their homes.

There is a global anti-racist resurgence that is sweeping the country. Violence against, and exclusion of Black communities in particular is being challenged head on. Temporary and precarious migration is racism – it excludes racialized communities from equal rights and protections. Full immigration status for all is necessary for racial justice.

Many migrants are engaged in essential work, ensuring that families and communities are cared for. Yet the majority of this work is low-waged, and the majority of those who do it are racialized and women migrants This work is necessary not just during a public health crisis, but to transition our economies away from the impending climate catastrophe. Bad employers use immigration status as a tool to divide and pit workers against each other – citizens against non-citizens – to keep wages low and profits high. Full immigration status for all is an essential step towards eliminating inequalities in the workplace and necessary for a transition to a just and sustainable economy of care.

We are all essential. We all deserve full immigration status.

Recovery from COVID-19 calls for a rethinking of the ways in which our communities and our economy is organized. Prime Minister Trudeau: Full Immigration Status for All is just, fair, necessary and urgent. The time is now.