82% of Scarborough residents say Liberals should stop Hydro One sale 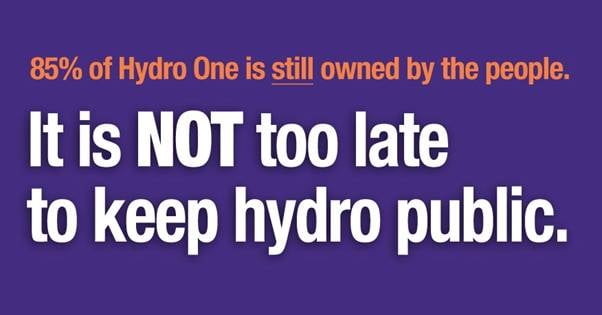 SCARBOROUGH, ON – More than four-fifths of Scarborough residents want the provincial Liberals to stop any further sale of Hydro One, according to new polling results released at a campaign launch on Saturday, February 27.

“This new poll reflects what we’re hearing at doors – people are angry about the sell-off of Hydro One,” said Joshua Moraes, spokesperson for the Keep Hydro Public Coalition. “Today, we are launching a new local campaign focused on Liberal MPPs who have supported the sale of Hydro One, despite the opposition of almost everyone in their ridings.”

A packed house helped launch the campaign today at the Mid-Scarborough Hub, before heading out to canvass and leaflet door-to-door. Campaign materials remind constituents that 85 percent of Hydro One is still owned by the people of Ontario, and it’s not too late to Keep Hydro Public.

Leaflets, billboards and newspaper ads call on Liberal MPPs Brad Duguid and Lorenzo Berardinetti to stand up for the people they represent and speak out now against Hydro privatization.

The campaign links MPP votes on the Hydro sell-off at Queen’s Park and their role as locally elected representatives. It is the first in a series of community launches happening across the province.

“We elect MPPs to represent us. Well, if my MPP is voting to sell Hydro, then he’s not listening to me or any of my neighbours,” said Kingsley Kwok, a Scarborough resident and member of Hydro One Not for Sale, which is launching the campaign together with Keep Hydro Public.

The Environics poll of 430 Scarborough ratepayers found that 82 percent of people oppose any further sale of Hydro One shares, with 50 percent strongly opposed. Of those polled, 72 percent are concerned that privatization means already high electricity prices will go up further. The poll is considered accurate to within plus or minus 4.7 percentage points, 19 times out of 20.

When the next provincial election happens, 61 percent of Scarborough voters said that Hydro privatization will make them less likely to vote Liberal. This sentiment is shared by nearly two-thirds of people who voted Liberal in the last election.

“Scarborough MPPs, like Liberal MPPs across the province, better pay attention and start speaking up on behalf of their constituents, or voters will take out that anger in the next election,” said Fred Hahn, president of CUPE Ontario, a partner in the Keep Hydro Public campaign.