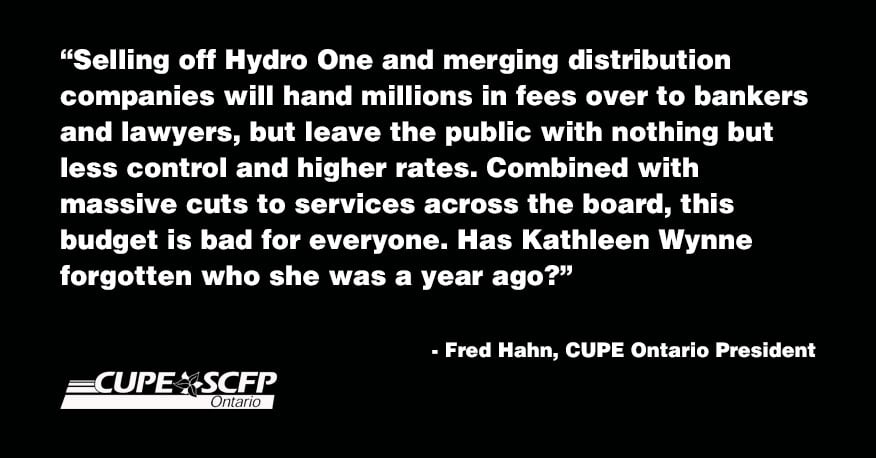 “Nobody voted for this,” said Hahn. “Selling off Hydro One and merging distribution companies will hand millions in fees over to bankers and lawyers, but leave the public with nothing but less control and higher rates. Combined with massive cuts to services across the board, this budget is bad for everyone. Has Kathleen Wynne forgotten who she was a year ago?”

“The Liberals cut corporate taxes to their lowest point since the 1930s, and are making the public pay – often the people least able to pay – by removing the support they and their communities rely on,” said Hahn. “At the same time they’ve richly rewarded corporate bankers and lawyers with hundreds of millions of dollars in fees on a string of privatization schemes. Selling off the public hydro infrastructure we spent a century building together will mean millions more going to the bankers, and all Ontarians will get is higher hydro bills.”

Wherever Hydro services have been privatized, rates have gone up.

The Wynne budget, like the Harper federal budget, will deliver more to the wealthy and leave the majority of Ontarians worse off, said Hahn.

“We’re not going to take it anymore,” said Hahn. “An overwhelming majority of Ontarians oppose Hydro privatization, and more and more Ontarians are feeling the pain of Liberal budget cuts. That’s why we’re seeing more and more people standing up and saying ‘Enough is enough.’ We saw it with university workers this winter, we’re seeing it with school board workers now. This is just the beginning.”

Last week, CUPE Ontario released a legal opinion on the government’s Hydro One selloff plan, and has committed to a half-million-dollar campaign to do what Ontarians of every political stripe want: Keep Hydro Public.

CUPE is Ontario’s community union, with members providing quality public services we all rely on, in every part of the province, every day. CUPE Ontario members are proud to work in social services, health care, municipalities, school boards, universities and airlines.