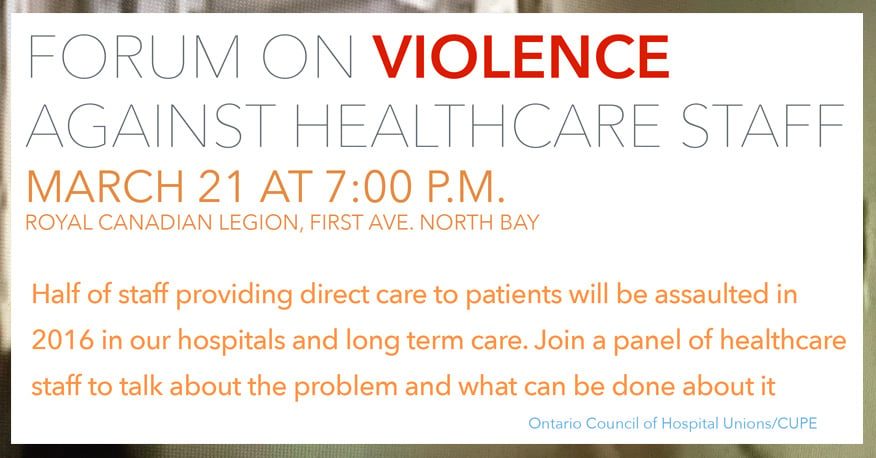 NORTH BAY, Ont. — The Ontario Council of Hospital Unions (OCHU)/CUPE will sponsor a public forum on violence against health care staff on March 21 at 7:00 p.m. at the Royal Canadian Legion on First Avenue, in North Bay. The forum will feature a panel of health care staff talking about their experiences with violence. The public is invited to attend.

Data shows that nearly half of health care staff providing direct care will be violently assaulted in 2016.

“The problem of violent assaults is one of the major health and safety issues facing staff in hospitals, long-term and community care. Some of the staff assaulted are so traumatized that they have never been able to work again. It’s time to acknowledge the severity of the problem, stop reprisals against health care staff who report assaults and to talk about action,” says Helen Fetterly a nurse and the secretary-treasurer of OCHU.

The March 21 forum aims to continue the public dialogue that began in earnest and quickly spread province-wide when the North Bay hospital fired Sue McIntyre, a nurse who spoke up about the problem of violence.

“NBRHC wants to put a lid on discussion about violence against its staff. We think the opposite is needed. We hope that there will be widespread support for a call for adequate staffing and for legislation to provide meaningful protections for health care workers from violence,” says Michael Hurley, president of OCHU.