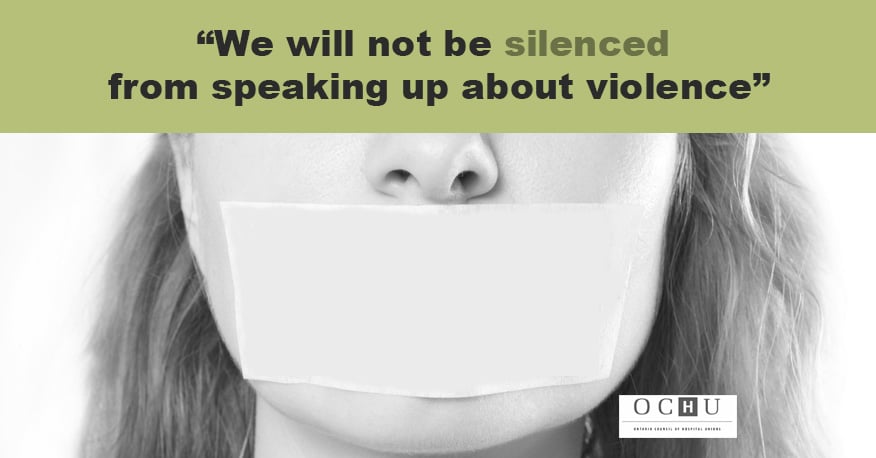 NORTH BAY, ON — North Bay nurse Sue McIntyre will speak publicly on Wednesday for the first time since her termination for voicing concerns about violence against health care staff. A media conference is scheduled for 10 a.m. February 24, 2016 at the Royal Canadian Legion, 150 1st Ave. West, North Bay.

McIntyre was one of several registered practical nurses (RPN) participating on a panel discussion on violence at a nursing conference in January. At the conference organized by the Ontario Council of Hospital Unions (OCHU)/CUPE, all 150 RPNs in attendance said they have experienced some form of violence from patients. 47 per cent of Ontario’s nurses suffered assaults by patients in 2014.

“Assaults on health care staff happen daily. We believe that Ontario’s understaffing in hospitals and long-term care is fueling patient and resident assaults,” says Sharon Richer, OCHU northeastern vice-president. “With a provincial budget coming this week, our hope is that the Ontario government will end the deep cuts to funding and staffing levels. Understaffing and working alone with patients, distressed about waits, and the quality or lack of care, or suffering from mental illness or dementia, are what is making the problem of violence so acute.”

Health care workers have reacted to McIntyre’s firing with an “outpouring of support and a hunger for change,” says OCHU president Michael Hurley. “There is widespread consensus among hospital workers that we will not be intimidated into silence.”

Hundreds of health care staff have taken the day off work to be in North Bay on February 29 for a rally “to demand that Sue McIntyre be immediately reinstated and to support the right of health care staff to speak openly about violence in their workplace,” says Hurley. “We are also calling for legislation that criminalizes attacks on health care staff and which protects a worker’s right to speak up about workplace violence.”