Hydro One sale a bad idea: Former TD chief economist and Secretary of State for Finance 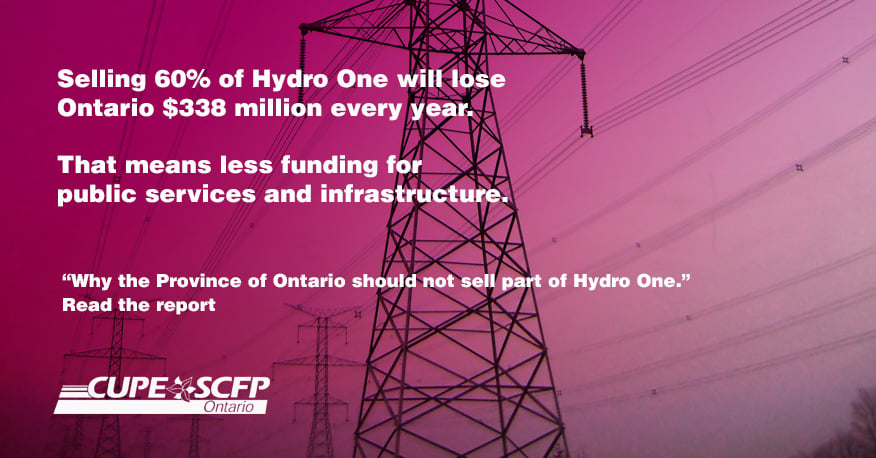 TORONTO, ON – The Ontario government’s plan to sell part of Hydro One is a bad idea that will end up losing hundreds of millions of dollars, according to a new report by economists Dr. David Peters and Dr. Douglas Peters.

The report, released by the Canadian Union of Public Employees (CUPE) Ontario details how the government’s plan for a partial sale of Hydro One will mean a net loss of hundreds of millions of dollars annually to the public.

“The electricity transmission and distribution business has been publicly owned and operated successfully in Ontario for nearly a century. It was not appropriate to sell the electricity business to outside investors in the past, and we do not believe it is appropriate for the Province of Ontario to sell it now,” said Dr. Douglas Peters, former chief economist for TD Bank and Secretary of State (Finance) in the Chretien government.
The government plans to sell a 60 percent stake in Hydro One and use the proceeds to invest in infrastructure. But the Liberal government is required to use revenue to pay down Hydro One’s outstanding debt.
Private-sector investors will demand at least an 8 percent return on investment, the economists state. Given current borrowing rates are very low on long-term government bonds, selling the stake in Hydro One does not make economic sense. In fact, selling 15 percent of Hydro One instead of borrowing for infrastructure investment will actually result in a net loss to the public of $84.7 million a year. Selling a 60 percent stake will cause a net annual loss of $338.8 million.

More than that, the economists believe the valuation of Hydro One that the government is using for its estimates is grossly overstated.
“The Premier’s Advisory Council believes Hydro One could have a value in the marketplace of $13.5 to $15 billion. We think the council is too optimistic, and that $10.6 billion is a more likely valuation,” said Dr. David Peters, professor of business administration at the University of Guelph-Humber in Toronto.

For detailed analysis, you can download and read the full report, “Why the Province of Ontario should not sell part of Hydro One.”

“Never mind the principled reasons for not selling our hydro system, this report makes it clear that the Liberal plan to sell Hydro One makes no economic sense. It will mean less money for vital services like hospitals and schools, increased rates for all Ontarians, and a total loss of public control and oversight,” said CUPE Ontario President Fred Hahn. “The vast majority of Ontarians agree that selling Hydro One is a bad idea. It’s time for the Wynne government to put on the brakes, hold public consultations and, really, to do what the public wants and Keep Hydro Public.