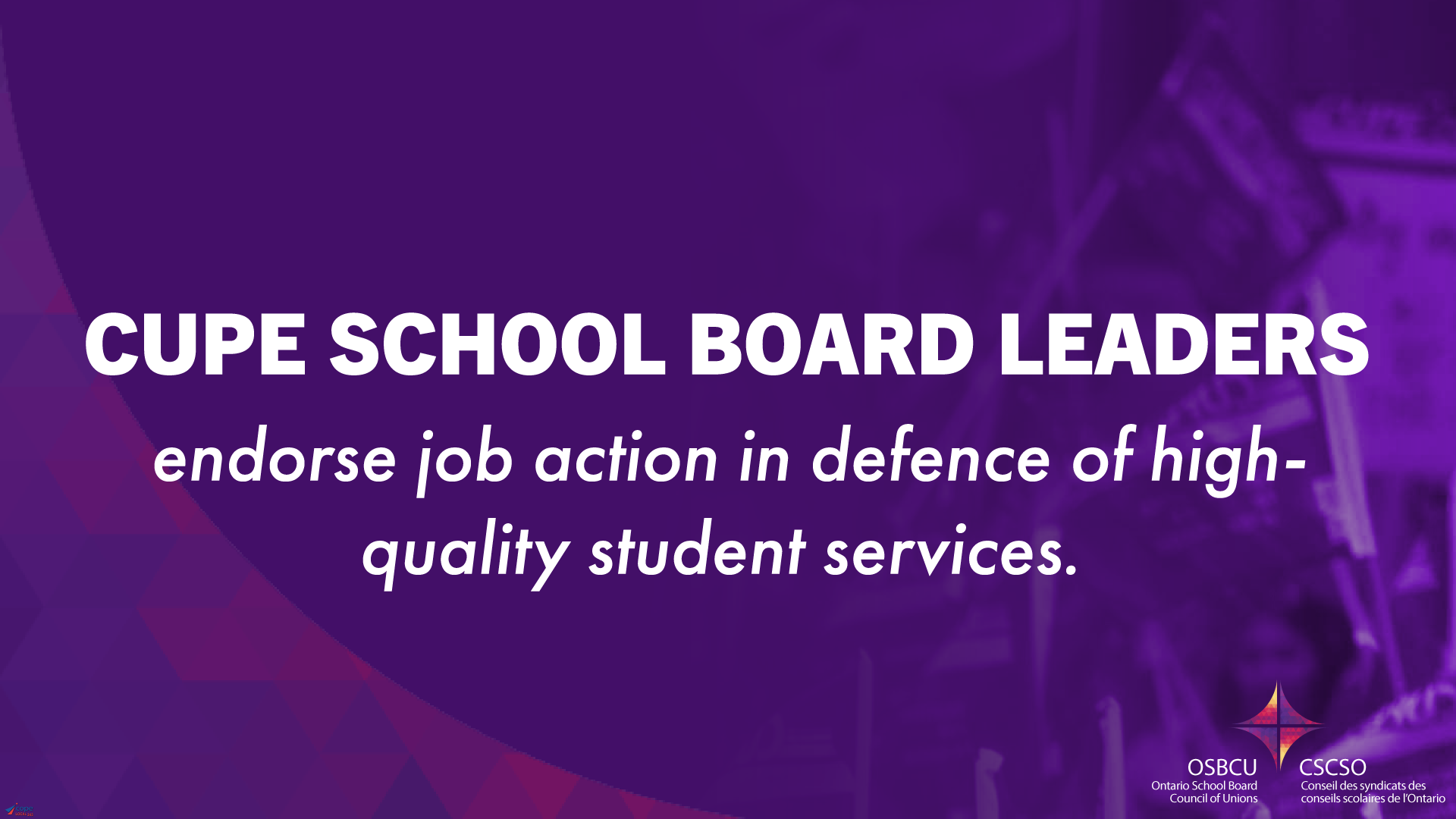 TORONTO, ON – Hundreds of school board leaders from Ontario’s largest union gathered near Toronto yesterday to give their resounding support for a job action plan that has at its heart the protection of education services for students.
Leaders from the Canadian Union of Public Employees (CUPE) took their decision amid ongoing job losses and cuts to services in school boards across the province, which have set the stage for a grim return to class for students in September and have left hundreds of workers laid off from the jobs they love.

“Our leaders, like our members, care deeply about the work they do and about the benefits it brings to students, families and communities,” said Laura Walton, president of the Ontario School Board Council of Unions (OSBCU), CUPE’s provincially designated agent for central bargaining.

“We believe the recommendation on job action by CUPE leaders delivers a clear message to our counterparts at the bargaining table. It’s a call to restore funding so that education workers can deliver the high-quality education services that our schools rely on. And it’s saying, let’s work together to tackle the issues that threaten the quality of the services provided by education workers,” said Walton.

The mandate given by CUPE school board leaders marks the first step of a two-step process to initiate job action by 55,000 CUPE education workers. The second step will be province-wide strike votes, which will be taken by the membership before September 17.

The endorsement of the job action plan follows CUPE’s request to have a Ministry of Labour conciliator present when the union next bargains with the province and the Council of Trustees’ Associations (CTA). Bargaining for a new central collective agreement began in May and the parties next meeting in bargaining on August 14 and 15. School board collective agreements expire on August 31.

“I’m proud of the commitment that school board leaders have shown and I’m confident that their concern for students and services, as well as for CUPE members, will be reflected in the results of the strike votes that will happen next month,” said Walton.

CUPE’s Ontario School Board Council of Unions represents members who work in public, Catholic, French and English school boards. They are part Ontario’s largest union, CUPE Ontario, which has 270,000 workers in every community in the province.
President of CUPE Ontario Fred Hahn attended Sunday’s meeting and congratulated leaders on their decision.

“I’m delighted to assure education workers of the support and solidarity of CUPE Ontario. We will be side by side with them as they stand up for students, stick up for themselves, and push back against a provincial government that wants to deprive Ontario students of the services they deserve,” declared Hahn.

CUPE’s National President Mark Hancock and National Secretary-Treasurer Charles Fleury also attended the meeting, offering encouragement to school board leaders preparing to defend value of good-quality jobs and good public education. Jointly, Hancock and Fleury pledged the resources needed to win the fight for high-quality education services and the support of all 680,000 CUPE members from coast to coast.