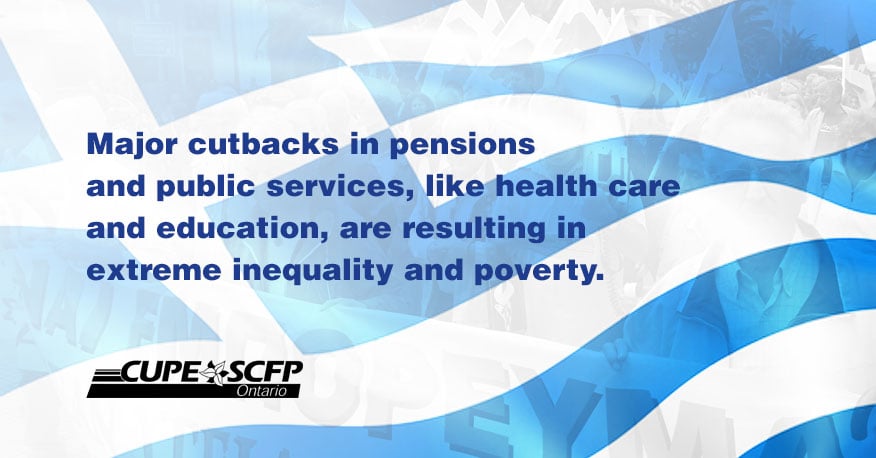 The Canadian Union of Public Employees (CUPE) Ontario stands in solidarity with the people of Greece and encourages other community and labour allies to demonstrate solidarity in the fight against austerity in Greece and around the world. Moreover we are proud to stand in solidarity with the trade unions of Greece. It is imperative that the European bankers and the International Monetary Fund (IMF) put the interest of the people and the workers ahead of the boardrooms and trading floors of Europe.

CUPE Ontario rejects the notion that a severe austerity agenda is the cure to economic problems currently faced by many countries globally. In Greece, we’re seeing the damaging effects of austerity play out; major cutbacks in pensions and public services, like health care and education, are resulting in extreme inequality and poverty.

In a recent New York Times article, Nobel Prize winning economist Paul Krugman shed light on the failed austerity agenda in Greece, revealing: “If you add up all the austerity measures, they have been more than enough to eliminate the original deficit and turn it into a large surplus. So why didn’t this happen? Because the Greek economy collapsed, largely as a result of those very austerity measures, dragging revenues down with it.”

There is an urgent need for a serious global conversation about real alternatives to austerity policies.

After years of imposed cuts to public services and pensions, Greece has an unemployment rate of 25 percent, with women and young workers suffering the most. And with deep cuts in social spending, over one-third of Greeks are at risk of living in poverty – more than any other country in the Eurozone.

In a nationwide referendum on July 5, Greek citizens will vote on whether to accept a bailout package, riddled with further pension cuts and tax hikes, or whether they will continue to support Prime Minister Alexis Tsipras’s anti-austerity policy for a better Greece.

In Canada, we are fighting our own austerity battle. For decades, Liberal and Conservative governments have been telling Canadians we must settle for less. Government austerity programs in Canada have translated into underfunding and privatization of public services. Kathleen Wynne’s plan in Ontario to sell-off 60 percent of Hydro One would put our income-generating public asset in the hands of profit-driven private investors, cutting government revenue that’s needed for vital public services.

We’re also seeing the harmful effects of austerity with the introduction of Liberal and Conservative policies that weaken unions, hurt workers and increase income inequality. The wealth gap has reached staggering levels, with the richest 20 percent of Canadians owning 70 percent of all wealth in the country.

CUPE Ontario is committed to mobilizing our members in communities across the province to build the country we all deserve. Together, we are one election away from retirement security for all, affordable and accessible child care, a public health care system we can count on, and good jobs in an economy that protects public services.